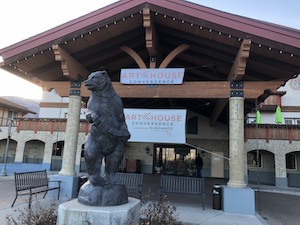 I just wrapped up a week at Art House Convergence in Midway, Utah. The convergence was a gathering of approximately 600 people representing art houses, film festivals, film distributors, and vendors. It was my first time attending but this conference goes on my short-list of favorites to attend. Not only was the scenery in Midway, Utah breathtaking, the attendees were some of the most friendly and interesting that I have met.

Though I was new to this conference and this industry, it was interesting to talk with the attendees and hear that they are dealing with much the same issues as we find in the performing arts. Art house cinemas and film festivals are all about attracting new customers, cultivating them into becoming members, and then to donors. Sounds familiar, right?

Well, art house cinemas and film festivals have to cope with a set of preconceptions as well. Cinema in America in the latter half of the 20th century has been one of megaplexes where tickets are purely a transactional process. Heap on that lots of stale popcorn, overpriced candy, gallons of soda, and strictly first-run blockbuster films, and that’s what most people experience. You buy your ticket, watch the film, eat your popcorn and when you leave the theater you might spend 10 minutes talking about the movie before it is flushed from your memory. It is a highly transactional, consumer-driven experience designed to maximize volume and minimize both your wallet and brainpower. If this wasn’t enough, declining audiences, down 16% in the latest summer movie season, add to the challenges.

Into this world, art house cinemas and film festivals take on the role of curating a cinematic experience for patrons. The films chosen aren’t usually first run films, they aren’t part of megaplexes and they focus on the experiential nature of film. Art house cinemas may be in historic theaters in a community and film festivals curate their programming through a limited timeframe, think Sundance or Toronto Film Festivals as large examples or Indy Film Fest and Atlanta Film Festival as smaller ones.

So at the conference discussions revolved around how art houses and film festivals move from the environment known by most consumers, that is, the transactional environment, to one that is experiential. The friction created even existed within their own organizations as operationally there were preconceptions of how these organizations should be run.

The discussions were fascinating because of the assumptions being made. Take art house cinemas for example. Should the experience of a patron be the same whether they are attending an art house cinema or a megaplex? Of course not, but consumers are trained by habit to lump these two different types of environments together.

One discussion with an art house staff member was particularly interesting. The arthouse in question was in a historic theater. The staff was running the theater like it was a museum. Tickets were still being printed and sold by hand. The concession stand functioned like it might have fifty years ago. The functional mechanisms hadn’t changed. In fact, some staff worked hard to make sure they didn’t change. They felt like modernizing the operations of the theater would somehow diminish the nostalgia of the overall experience.

While this was a strongly held view among staff, memberships were suffering, donations weren’t being made and maintaining the historic structure was becoming challenging. While the theater was working so hard to preserve the historical feel, they were actually re-enforcing the very transactional processes that were keeping them from learning about their patrons and improving the overall experience! They weren’t engaging with their audience at all.

In another discussion, an executive director of a film festival was lamenting that while they knew that new patrons were attending the festival yearly, there was no way to know who was attending as they weren’t collecting the kind of information that would allow them to reach out after the festival to invite them back. When I asked why this wasn’t happening the response was that it was more important to get ticket-buyers through the line. They were selling the tickets anonymously!

Both organizations wanted to grow their memberships and cultivate donors but their transactional habits only reinforced the barriers that were keeping them from engaging with their audience. Other art house cinemas and film festivals have made the jump from the transactional to the experiential. They are engaging their audience by becoming a guide, joining the audience as they experience a cinematic journey. Knowing the audience is critical to engagement.

Fundamentally, having the processes, people and support systems in place is the key. Through understanding that audiences want to take a journey, it is critical that the organization take the time to understand and learn from their audience. By gathering information about audiences, strategic decisions can be made to engage, retain and cultivate lasting relationships.

I came out of the Art House Convergence ready to seek out my local art house cinema and film festival. As an eager potential audience member I am ready to engage, hopefully, they are too.

Look for new episodes of the 10 to Curtain podcast on the first and third Tuesday of each month.